Wasabi – Not Just for Sushi 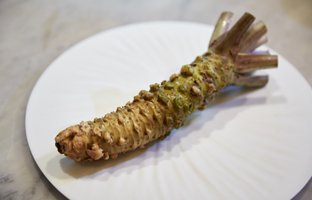 "I found something amazing the other day!"

With a grin, Chef Guillaume pulled out a stem of wasabi measuring a hefty 20 cm in length and 5 cm in diameter.

"I've used wasabi in cooking many times before, but never with a product like this," he explains, touching the green root to his nose, "with so much freshness and aroma."

Wasabi is a spice native to Japan and has long been used for its alleged ability to prevent spoilage. It is no coincidence that it is the condiment for sushi and sashimi. Those familiar with it will recall what happens when somebody is overzealous with their portion of the spice. That eye-wincing, nose-clearing sensation is not something easily forgotten. Interestingly, wasabi belongs to the same plant family as broccoli, cauliflower, and cabbage.

Chef Guillaume travelled to Izu, a peninsula on the Southern coast West of Tokyo. There, he visited a picturesque wasabi farm, framed with rippling waterfalls and teeming with flora. Even the most content city-dweller would struggle to be unmoved by such natural beauty, let alone Chef Guillaume who has always had a soft spot for the great outdoors.

"The surrounding areas were so lush. It's hard to be unaffected by such beautiful nature; it really moved me." 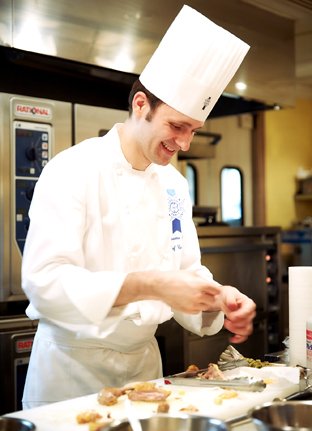 Inspired, Chef Guillaume builds a French dish around the popular Japanese ingredient. The resulting creation is a masterpiece brimming with interesting juxtapositions. From ingredients to cooking methods, there are a number of what appear to be conflicting yet complementary elements throughout the dish.

Guinea fowl is chosen as the main ingredient, and pairing it with wasabi is quite unheard of. In fact, the delicate white flesh of the guinea fowl is able to highlight the subtlety of the Japanese spice, which is the reason behind its use. The wasabi itself is used in the sauce and as a garnish in a purée of mint and green peas.

"The aroma of wasabi is more pronounced when used raw, and that's how I used it in the purée. But I also used it in the sauce, which means I actually cooked the wasabi. Letting it blend in with the sauce this way, I transformed the wasabi into a kind of a surprise flavour to show how delicate it can be."

Both applications of wasabi challenge how the root is used in Japanese cuisine. While wasabi may sometimes be mixed with other ingredients, the use of mint (a common herb in many parts of the world) in Japanese cooking is highly unconventional. Moreover, almost always seen as a fresh garnish or condiment, wasabi is never cooked, let alone blended into a sauce. One would be hard-pressed to find a Japanese native who doesn't reflexively furrow their brows in puzzlement at the thought of cookedwasabi.

In terms of preparing the guinea fowl, the chef broke it down into two parts. He cooked the legs sous-vide with rice straw; the bateau (bone-in breast and back meat), also with rice straw, he encased in clay and baked in the oven. This combination of sous-vide and clay-baking in the same dish captures the notion of merging traditional methods with modern techniques, a neat time warp on the plate.

Both the legs and bateau were then finished on the grill and this is revealed to be inspired by a popular style of Japanese grilled poultry: "It's actually yakitori!"

As a final contrast, the succulent fowl, redolent of straw and spice, is dressed on an intricate aritayakiplate, a type of traditional Japanese china. As if on an exotic porcelain canvas, Chef Guillaume has redrawn the image of French cuisine.

Grow Your Career or Business – Our Cuisine, Pastry and Boulangerie training qualifies for various grants

The new film brings us into the kitchen with Julia Child to hear the stories from her early career as a Cordon Bleu student to the cooking book and television ...