A Subtle Key to Japanese Cuisine 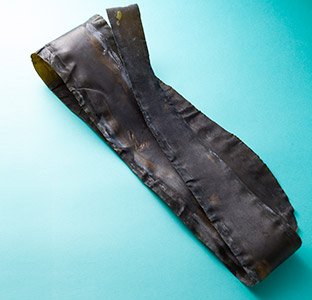 For most people living outside of Asia, seaweed is something that we come across at sushi restaurants and rarely anywhere else. Whereas in Japan, several different kinds of this aquatic plant play a huge role in the country’s cuisine.

Kelp, though, is in a league of its own. In Japanese, it’s known as kombu, and it is one of the most versatile ingredients in the kitchen. It can be simmered with soy sauce, or salted and dried. However, it is most widely used to make cooking stock (dashi), which is then used to flavor just about everything in Japanese cookery.

This was one of the reasons Chef Guillaume Siegler, Le Cordon Bleu’s executive chef at the Tokyo campus, was so drawn to it. “Kelp is the fundamental ingredient in Japan and I felt the roots of Japanese food culture were in kelp.”

Now, if there’s one thing that you will learn about Japan after spending some time here, it is that things are done “just so.” One puts on a kimono in a certain way. One formally serves tea in a certain way. And, of course, one prepares dashi from kelp in a certain way. As Chef Guillaume explains, “it is a finely tuned, perfected technique of slowly cooking kelp in hot water—which is never allowed to boil—that infuses kelp taste and aroma in the cooking stock.”

If you don’t know this flavor already, you will after just a few months in Japan. It is delicate, yet instantly recognizable. In fact, that’s why it can be a true challenge for a chef to use it in French cuisine without having it “overpower” the taste of a dish with a Japanese flavor. Chef Guillaume decided to take on that challenge, but he acknowledged that “achieving that delicate balance was his greatest difficulty.” 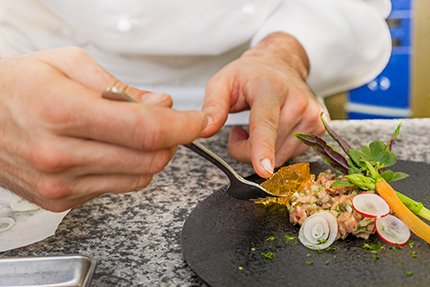 The technique that the chef had in mind was one that has been used here for centuries with another traditionally Japanese ingredient: fish. Kobushime is a marinating style done with plain white fish that is soaked with sake, wrapped in kelp, and left until morning. The flavor seeps into the fish overnight, infusing it with the kombu’sunique aroma.

Chef used the same method, but instead of using fish, he used a veal leg, which was wrapped in kelp, sealed in a vacuum pack, and heated to 50°C for two hours. The pink, medium-rare meat had just a hint of the kelp flavor.

Spring in Japan, with its vibrancy and the feeling of nature coming alive again after the long winter, was on Chef Guillaume’s mind when he made the next step in his preparation. He cut the veal into cubes in a tartare style, and tossed it with finely chopped onions, petite cucumber pickles, and shiso leaves. He seasoned the tartare with a sauce made from grapeseed oil, mustard, and egg yolk, among other ingredients, and served the dish alongside a tuile biscuit dusted with salted kelp and golden gelée.
Douzo, bon appétit! 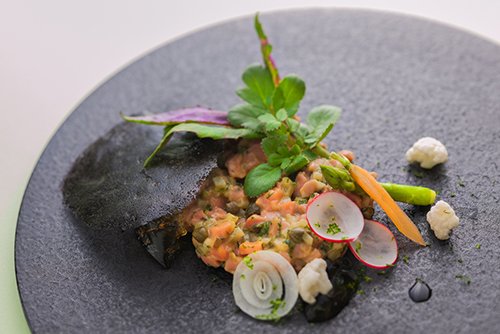 This unique mix of flavors and techniques led to a strikingly delicious combination: tartare with “bite,” melt-in-your mouth gelée, and crispy crackling tuile—all strikingly different in texture, but all touched with the flavor of this very Japanese ingredient. As Chef Guillaume explained, this mixing of techniques and cuisines is something that should only be done after comprehending the elements that go into a dish. “French cuisine thinks highly of superimposing a variety of ingredients, but this is not simply a matter of throwing them together. It is a matter of properly understanding each one, and its unique properties, before bringing them together in a tasteful marriage.”