The Le Cordon Bleu Australia story really starts in 1984 with the acquisition of Le Cordon Bleu Paris by Monsieur André Cointreau. This was the beginning of a transformation that would launch Le Cordon Bleu as a global educator - not only in cookery and pâtisserie (its traditional culinary roots), but in hospitality, hotel management and gastronomy. Expansion of the business started in 1988 with the opening of a culinary school in Ottawa (Canada), the purchase of the School of Cordon Bleu Cookery in London and the opening in 1991 of a school in Tokyo. Australia was the next exciting expansion opportunity to be pursued by Monsieur Cointreau. 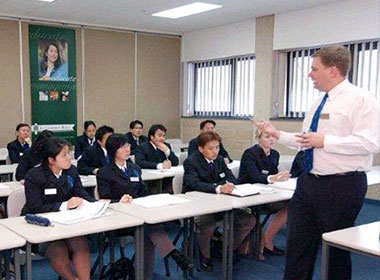 As part of this arrangement, students had the opportunity to be awarded the Le Cordon Bleu Diplôme Culinaire d’Hotelier, in addition to the Swiss Hotels Association International Diploma of Hotel Management. TAFE SA (through the Regency Hotel School) was contracted to deliver each of these programs. This partnership arrangement lasted for over 10 years.

Le Cordon Bleu Australia was registered as a company in March 1998, with the first meeting of the Board of Directors occurring in July 1998.

Soon after this, Le Cordon Bleu gained training provider registration with the Accreditation and Registration Council of SA under the Vocational Education, Employment and Training Act and the Education Services for Overseas Students Act. This registration allowed Le Cordon Bleu to recruit domestic and overseas students and to have its own courses accredited.

While Le Cordon Bleu is registered to deliver a broad range of vocational and higher education programs in its own right, partnering with other highly respected, credible and quality tertiary institutions, it has from the very beginning, been a central component of the Le Cordon Bleu business model - a model that continues to drive business expansion today.

In 1996, at the invitation of the NSW government, Le Cordon Bleu was asked to assist in the provision of culinary training in preparation for the 2000 Sydney Olympic Games. This led to the establishment of a partnership agreement between Le Cordon Bleu and the Northern Sydney Institute of TAFE. Delivery of the Basic and Intermediate Cuisine and pâtisserie programs commenced at the Ryde Campus in 1997. The Le Cordon Bleu Sydney Culinary Arts Institute was registered as a company in 1999, and remains as its trading name today.
The Superior Cuisine and pâtisserie courses were added to the program profile in 2004, enabling graduating students to be awarded with the Diplôme de Cuisine and the Diplôme de Pâtisserie. Delivery of the Bachelor of Business (International Hotel Management) and Bachelor of Business (International Restaurant Management) commenced in 2011.

In 2015, the Le Cordon Bleu Sydney Culinary Arts Institute continues to offer these programs along with the Grand Diplôme and the Diplôme Advancé de Gestion Culinaire.

In 1999, the Regency Hotel School also facilitated the design of the first Le Cordon Bleu degree program - the Degree in Restaurant Business and Management. Delivery commenced in 2000.

Le Cordon Bleu opened its Australian headquarters in Regency Park, Adelaide in 2000 with a small team appointed that employed strategies to significantly build student numbers and in turn, to create the foundation for the rapid expansion of Le Cordon Bleu business activities and reach.

Also in 2000, Le Cordon Bleu entered into a partnership with the University of Adelaide to design and deliver the Le Cordon Bleu Master of Arts in Gastronomy. Course delivery commenced in 2001, with the last intake of students occurring in 2009. It was the first full-time, on-campus higher education gastronomy program in the world.

As testament to its ongoing commitment to gastronomy education, online delivery of the Le Cordon Bleu Master of Gastronomic Tourism commenced in partnership with Southern Cross University from its Lismore campus in 2012. Each year this course grows in popularity attracting students from across the world.

Looking to the Future

In 2017, delivery is planned for the new qualification - the Le Cordon Bleu Bachelor of Business (Culinary Arts and Management) at the Regency International Centre for Tourism, Hospitality and Food Studies.

Le Cordon Bleu Australia is excited to announce a major refreshment of its Bachelor of Business in International Restaurant Management (BIRM) and Bachelor of ...

It’s every chef’s dream to be globally recognised by the Michelin Guide. So when Sydney alumna Michelle Goh was named one of Asia’s top female pastry chefs by ...