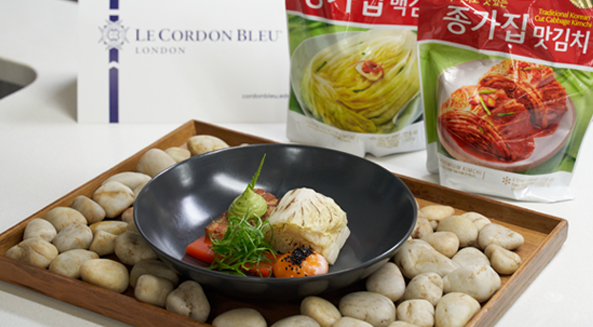 Le Cordon Bleu London is pleased to announce the launch of this year’s Kimchi Cook Off competition in partnership with Association Mes Amis (AMA) and global kimchi brand, Jongga.

Open to anyone who loves cooking with kimchi or wants to get creative in the kitchen, the Kimchi Cook Off is a cooking competition that challenges entrants to create innovative recipes encompassing the traditional Korean dish. The aim of AMA is to promote Korean culture abroad, and in 2017 they launched the Kimchi Festival in Paris, followed by a culinary competition showcasing kimchi in partnership with Le Cordon Bleu Paris in 2018.

In 2021, AMA brought the Kimchi Cook Off to London for the first time. The competition was won by Fernando Ortiz Rosas, who made low burn white kimchi, pork belly, avocado, red kimchi jellies and egg yolk. Fernando commented at the time: "As an aspiring chef, this competition has inspired me to experiment with Korean foods other than kimchi, such as gochujang and soy sauce."

People have enjoyed kimchi in Korea for over 1000 years, and this versatile dish combines five key Korean flavours: sour, bitter, salty, sweet and spicy. The version of kimchi people may be most familiar with is made using cabbage, but there are over 20 types with ingredients varying to reflect the different tastes, seasons and regions of Korea. Kimchi can be combined into a huge range of dishes, so AMA and Le Cordon Bleu are challenging entrants to design a delicious and unique new kimchi dish.

Entering the competition is easy, entrants simply create their recipe, take a picture of the dish and submit the entry following the steps on the Kimchi Cook Off website between the 21st and 25th September. Ten finalists will be chosen by a panel of judges, including Le Cordon Bleu master chefs, to take part in the final cook off which will take place at Le Cordon Bleu London on Wednesday 12th October 2022. A total of £10,000 in prizes is up for grabs for the winner and runners-up.

Rules and guidelines can be found on the competition website.

The Galette des Rois or three kings’ cake is served during Epiphany. The season begins on the Twelfth night after Christmas, January 6th, and commemorates the ...

Le Cordon Bleu was delighted by the recent news that the French baguette has received Unesco heritage status as part of the body’s intangible cultural heritage ...