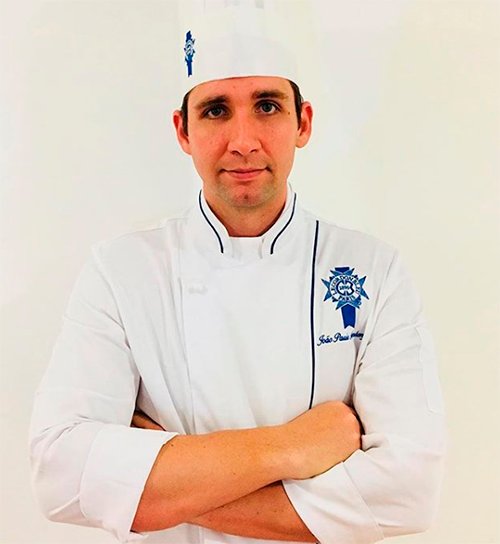 He wanted to be a basketball player and even became part of the Flamengo team in Rio de Janeiro. He attended the college of communication at PUC-Rio and graduated, but his passion by gastronomy was stronger. The Chef João Paulo Frankenfeld started his career as a student in Lyon, France, worked as a cook for ten years in Europe and the United States and now he lives a new phase as head chef of Cusine of Le Cordon Bleu Rio de Janeiro.

"As an athlete, I have always valued the discipline and when I tried the gastronomy I saw that it is a very disciplining environment, but at the same time, you offer pleasure moments for people. I also really enjoyed that environment where you work with your hands just like it was in basketball. But it is important to remember that the chef does not always do what he likes, but what people like. It is a profession of great dedication", he says.

Read the complete interview with chef João Paulo Frankenfeld and get inspired!

How was your first experience in the kitchen?
João Paulo Frankenfeld: Since I was a child, I was always with my mother in the kitchen, but the decision to pursue a career only came much later when I was a basketball player and was studying communication at PUC-Rio in 2006. I met the aunt of a friend who was a chef in Rio Grande do Sul and asked her to work in her restaurant to learn more about the profession. I loved the experience and soon I became interested in gastronomy. Basketball and cooking have in common the discipline, which I also learned in military school in the United States, and the work with hands, two factors that inspired me to change my career. I asked the chef in charge of how could I start the career and she told me that to learn, I would have to leave Brazil. At that time there were still no good schools in the country.

What were the first steps in your career?
João Paulo Frankenfeld: I studied at an institute in the city of Lyon, France, in 2007, where I spent three years between internships and jobs. In Paris, I was a trainee and cooked at Guy Savoy, a three Michelin stars, and I worked for one of the two Michelin stars Gordon Ramsay's restaurants at the Trianon Palace Hotel in Versailles. In Germany, I worked in Munich, helping a friend to open a Farm to Table restaurant, nothing was bought outside the region, even the drinks. After that, I went to the United States and worked for a catering company. I returned to Brazil in 2016 and worked for a restaurant in Rio de Janeiro.

I worked with a chef who said that it's not enough to like gastronomy, you need to love it.

What were the challenges at the beginning of your career?
João Paulo Frankenfeld: My difficulty was the language because I didn´t know French. There is also the day-to-day difficulties of the profession, that is very arduous, the hostile environment, with many people screaming, there is the pressure and hurry, we burn, cut ourselves, and still have to give up many things in life. The days when we work the most people are off duty, so we have almost no social life. Our friends ended up being people who work with us. I worked with a chef who said that it's not enough to like gastronomy, you need to love it. 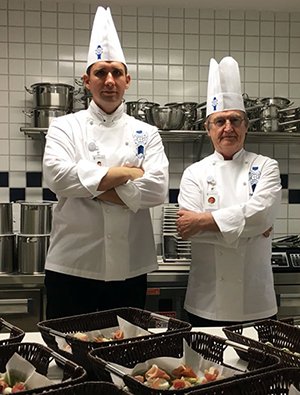 How is your experience as a head chef at Le Cordon Bleu?
João Paulo Frankenfeld: For me, it is a rewarding phase because it is a recognition to be in the biggest culinary institute in the world. I love to teach, discipline and pay attention to detail.

What are the key differentiators of Le Cordon Bleu teaching?
João Paulo Frankenfeld: All students perform the recipe alone and this is important because the cook only learns by doing, not reading and watching, and we don't teach recipes, but rather, techniques. So it is difficult to find a teacher because it's not enough to know how to make the recipe, it's necessary to explain all the steps, even chemically and physically. Example: in the case of puff pastry, I have to explain that the type of flour used will make difference in the recipe. Depending on the country and climate, it changes up to the amount. I had to adapt all my recipes when I returned to Brazil because it is a very humid country. The training at Le Cordon Bleu has the differential of making the student understand how the recipe is so that they think about each step they are taking.

What are the impacts in the Rio de Janeiro gastronomy market with the arrival of an international school like Le Cordon Bleu in Brazil?
João Paulo Frankenfeld: I hope that the opening of Le Cordon Bleu will really change the market in Rio de Janeiro. I worked in a restaurant in Rio and I saw that the labor qualification is still not good. We want to train qualified professionals and change part of the gastronomy culture of Rio de Janeiro, I do not mean to turn it gourmet, but to make the public understand what they are consuming. People here eat a carbonara but do not know how the real recipe is. I believe that with better professionals, consumers will become more demanding and the entrepreneur will see themselves in the obligation to improve their enterprise.

What are your culinary style and specialization?
João Paulo Frankenfeld: I like contemporary, more modern cuisine, but my background is in classic French cuisine.

What is your favorite recipe?
João Paulo Frankenfeld: I prefer to cook meats, proteins, fresh pasta and baked goods.

What is your message to students who are starting to study at Le Cordon Bleu?
João Paulo Frankenfeld: At Le Cordon Bleu, students will receive a real in-depth knowledge of French techniques and will learn everything they need to enter the job market, experiencing what would be a kitchen day to day to become great professionals. They will have access to the most modern kitchen equipment. It's the cooks' Disneyland!