At Le Cordon Bleu we have welcomed many incredible chefs through our doors to demonstrate their skill and share their knowledge with our students. Le Club Des Amis is made of up those chefs who we consider as friends of Le Cordon Bleu, and we are excited to share some of their incredible recipes with you.

This recipe is from Rakesh Nair, Head Chef at the Cinnamon Club in London. In 2019, Rakesh performed a guest chef demonstration at the Le Cordon Bleu London Summer Festival. He demonstrated some of the innovative, modern Indian cuisine that the Cinnamon Club are famed for, and we are pleased to share his fantastic recipe with you here to try at home!

Marinate the lamb with salt, red chilli powder and ginger garlic paste. Set aside for about 20 minutes. Mix all the ingredients for the second marinade then transfer to a small bowl. Smoke the meat and the second marinade by placing them in a deep metal dish and putting live charcoal in the centre in a small bowl. Gently blow the charcoal and place cloves on top of it. Drizzle over some clarified butter or ghee and quickly cover with a lid or tin foil, ensuring the smoke does not escape. Leave the meat covered until the charcoal dies.

To prepare the sauce, add half the whole spices to the lamb stock in a saucepan and simmer until the liquid reduces to half. Remove, strain and set aside.

Boil the onion and tomatoes with a little water until soft. Remove, allow to cool and blend to a smooth purée. Strain and set aside.

Heat oil in a saucepan, add the remaining whole spices, rock moss, dry lime and fenugreek leaves, then stir until the flavours release. Add the ginger garlic paste followed by the powdered spices and cook for one minute. Add the stock and the purée and simmer until reduced slightly. Stir in the yoghurt and cook for a couple minutes. Remove from the heat then blend until smooth. Strain and keep hot.

For the masala cashew nuts, heat the oil, add chopped garlic and cumin and cook until crisp, then add the chopped peanuts, stir for roughly 30 seconds then add the rest of the spices and mix well. Remove from the heat, leave to cool and use as a garnish for the lamb saddle.

To cook the meat, heat the oil in a frying pan. Sear over medium heat for about two minutes then flip and cook another two minutes. Apply the second marinade over the meat and finish in an oven preheated to 180° C for four to five minutes.

In the same pan, heat remaining oil, add the chopped garlic and cook until golden. Add the pak choi halves, sprinkle over salt and cook for a couple minutes. Remove the meat from the oven and allow to rest for three to four minutes, before slicing evenly and placing on top of the sauce. Serve with the pak choi on the side and sprinkle with masala cashew nuts. 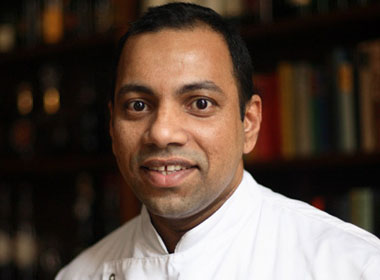 Born in the small coastal town of Varkala, Rakesh Nair has evolved as a chef throughout his 17-year culinary career, devising refined Indian cuisine, upholding the state’s complex and interesting flavours while adopting Western culinary techniques. Rakesh has been in The Cinnamon Club group since 2002, where he met renowned Indian Chef Vivek Singh, CEO of the group in Delhi, who asked him to join the team as Chef de partie. Rakesh worked his way through the ranks to his current role as Head Chef at The Cinnamon Club.

Learn more
News
Fermented Foods: Why is it good for you?

Can fermented food and fermented products be good for you? In this article, we explain the facts about health and how fermentation works.