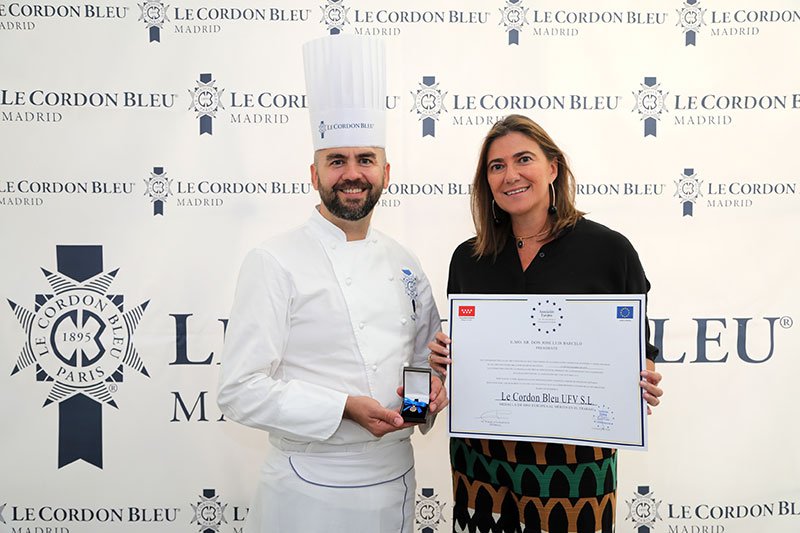 Mr. José Luis Barceló, The President of the Association, and Mr. Juan Ignacio Navas Marqués, Vice-President, counsellor of the Kingdom of Spain and Master in European Law, handed out the medals and ribbons to Le Cordon Bleu Madrid, represented by Rosario Barrios, General Manager of the Culinary Arts and Hospitality Management Institute.

Founded in Paris in 1895, Le Cordon Bleu is considered one of the leaders in culinary arts and hospitality management training institute in the world, training 20,000 students of over 100 nationalities every year. Le Cordon Bleu combines innovation and creativity with tradition through its certificates, diplomas, bachelors and master degrees. Pedagogical innovation is firmly rooted in the institute’s DNA to train the next generations of chefs and hospitality / gastronomy managers to the highest level. Its President, André Cointreau, responsible for its expansion and international success, declares:

Le Cordon Bleu Madrid opened its doors seven years ago, alongside other openings in Latin America. Since then our partner, the University Francisco de Vitoria (UFV) has shared the same vision and values. In this commitment to quality we have developed together Bachelors and soon a Masters degree. Le Cordon Bleu is thrilled to be awarded this Gold Medal, honouring its success in delivering high level education in the Spanish capital, and celebrating a strong relationship with UFV..

Well known for its prestigious diplomas in Cuisine, Patisserie and well as the Grand Diplôme®, the most complete programme offered by the institution, Le Cordon Bleu has alliances with some of the most important universities in the world, such as the UFV, which has enabled it to take gastronomy to the highest level.

The Madrid institute also offers a unique qualification in Spanish Cuisine, which attracts numerous international students every year.  The programme, endorsed by the Royal Spanish Academy of Gastronomy, covers all the most distinctive products and techniques of Spanish gastronomy. Rosario Barrios stressed the importance of gastronomy for the country's development:

Le Cordon Bleu Madrid has always had as a priority its commitment to education and training and its responsibility when it comes to preserving and valuing Spanish cuisine; an international leader and a key part of the brand that is Spain

The mission of the European Association of Economy and Competitiveness (AEDEEC, initials in Spanish) is to promote, develop and recognise those people and institutions that promote good business development within the European framework. The AEDEEC is thus focused on identifying and recognizing all those actions and measures carried out by companies which serve as an inspiration and stimulation.

The European Gold Medal for Merit at Work rewards and celebrates the success of both Spanish and European companies that support business spirit and awareness with their initiatives and practices. All the companies and professionals that receive the award become a benchmark and a model to emulate in their sector, both nationally and internationally.