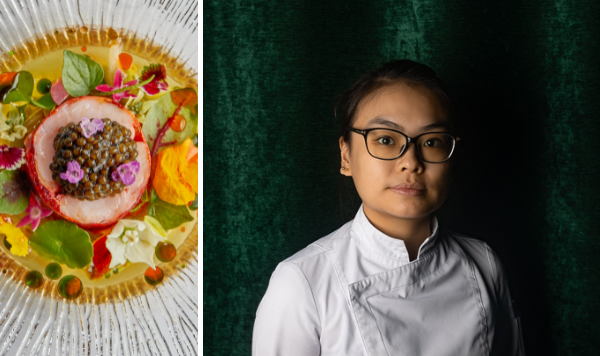 It’s every chef’s dream to be globally recognised by the Michelin Guide. So when Sydney alumna Michelle Goh was named one of Asia’s top female pastry chefs by the esteemed publication, it put her and her restaurant on the map.

The 28-year-old, who was born and raised on Borneo Island in Malaysia, spent three years studying and working in Australia before moving to Thailand to open modern European restaurant, Mia. She said it was her time at Le Cordon Bleu Sydney that gave her the skills and ability to take her career to new heights.

“I knew from very early on that I wanted to be a chef, but being at Le Cordon Bleu was the first time that I was surrounded by like-minded people who shared that same passion and love for food,” Michelle said. “I met people from all walks of life who were connected through the same thing…it was a very special time for me.”

Her recognition in the Michelin Guide came as a welcome surprise and was something she never expected to happen throughout her career. “I am extremely humbled and grateful to be included among so many other amazing chefs on the list...it’s really nice to be recognised for your hard work,” she said.

Not only was she listed as one of Asia’s top female pastry chefs, but her fine dining restaurant Mia made the cut in Michelin Guide’s Thailand edition for 2022. “To be honest, it all feels pretty surreal,” Michelle said. “It was something I never expected to happen, nor did I actively pursue it. It came as a very pleasant surprise and I was shocked at how well it was received by so many people.”

After completing a Certificate III in Commercial Cookery in 2013, Michelle moved to Melbourne and worked at The Intercontinental Hotel for her six-month industry placement. She then returned to Sydney to study Patisserie and landed a part-time job at Meat and Wine Co while also volunteering at The Shangri-La, working under renowned chef Anna Polyviou. In 2014, after finishing a Certificate III in Patisserie, she scored a full-time job at Neil Perry’s Rockpool, before heading to Bangkok to start her own venture with partner Pongcharn Russell.

Michelle admits she knew very little about food and the hospitality industry before arriving in Australia to study with Le Cordon Bleu. “The first time someone in Australia offered me a gooseberry, I ate it whole, leaves and all,” she said. “Coming from a small town, I didn’t grow up with the opportunity to use and taste different types of produce."

I strongly believe that at Le Cordon Bleu they don’t just teach students to cook, but also allow them to experience real working culture. You really do get to practice certain life skills such as punctuality, personal hygiene and organisation.

For those wanting to take their career to the next level, Michelle has one piece of advice: Stay humble. “I still learn every day and am always open to opinions and ideas from my colleagues, even the interns and commis,” she said. “You never know what others are able to share with you and the moment you believe you know everything is the day you stop learning and progressing.”