A 120-year history in teaching the french culinary arts

Few Culinary Arts establishments have a history as fabulous as that of Le Cordon Bleu. The school, which is now famous the world over, first took shape in France, the home of gastronomy and the art of dining, and more precisely in Paris. Here’s how it all began…

The initiative of one woman: Marthe Distel 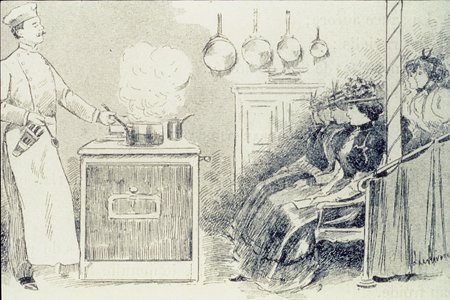 In 1895, French journalist Marthe Distel had the idea of training women in culinary arts, for use in the running of their households. So she started a publication called ‘The Cordon Bleu Cook’ (‘La Cuisinière Cordon Bleu’), which revolutionized the world of culinary arts, until then the preserve of men.
Magazine Cuisiniere Cordon Bleu 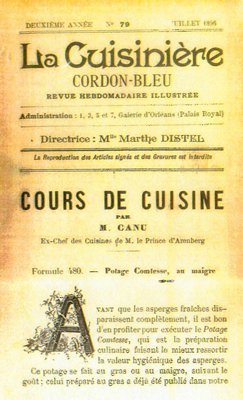 The magazine was so successful that Marthe Distel had the idea of offering her readers cookery lessons. She therefore founded Le Cordon Bleu school of Culinary Arts in Paris in 1895. The very first lesson took place on Tuesday October 15th 1895 with Chef Charles Driessens. Right from the start, the school welcomed outstanding Chefs to deliver culinary demonstrations, including Chef Henri-Paul Pellaprat, F. Barthélémy, Charles Poulain, Auguste Colombié, all very well-known at the time.

The lessons enjoyed immediate success, and the Paris school’s reputation quickly spread to several countries. In 1897 the first Russian student was welcomed to the school, and the first Japanese student arrived in 1905. In an article on Le Cordon Bleu Paris, the London Daily Mail newspaper at the time was amazed to observe that ‘it is not unusual for as many as eight different nationalities to be represented in the classes’. Julia Child, who would go on to achieve great fame, was one of these foreign students, attending classes at the Paris school in 1948.

A new international dimension thanks to the Cointreau family

In 1984, the Cointreau family, descendants of the founding families of Rémy Martin and Cointreau liqueurs, took over the presidency of the school, replacing Elisabeth Brassart, who had been the school’s director since 1945. Mr. André Cointreau lends the school a new international dimension, welcoming ever more international students and opening many schools outside of France. Since the 2000’s, a network of Le Cordon Bleu schools has been established in the United States, becoming the country’s leading culinary arts provider.

Today, Le Cordon Bleu is present in 20 countries with over 50 schools, and it trains some 20 000 students representing 90 different nationalities each year.