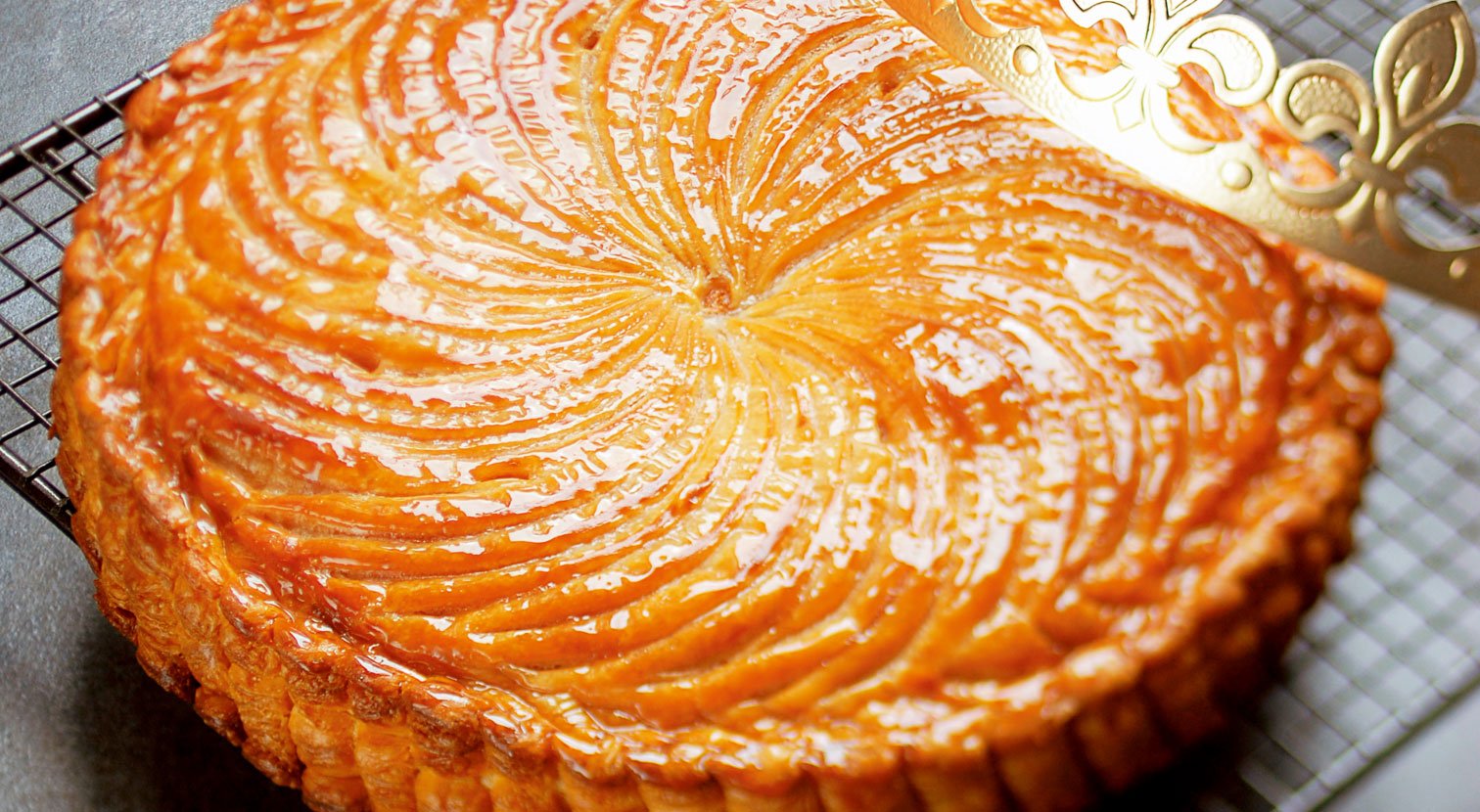 The Three kings’ cake is served during Epiphany. The season begins on the Twelfth night after Christmas, January 6th, and commemorates the arrival of the three kings to see the baby Jesus.

To mark the occasion, Le Cordon Bleu Master Chefs have created this Three Kings' Cake which follows the traditional version served in Northern France. A bean, or “fève” is hidden in the cake and the person whose portion contains the bean is crowned king or queen for the festivities. The cake differs from one region to the next, with different countries taking slightly different approaches, but Parisians know it as a flat, round puff pastry cake filled with a thin layer of almond cream.

If using already prepared puff pastry, skip to the second part of the recipe.

The day before:
For the puff pastry:

Tip the cold water and salt into a large bowl, then mix in the hot melted butter. Add the flour and mix the dough with a plastic dough scraper. This dough is called ‘détrempe’. Place the détrempe on a lightly floured work surface. Knead gently to make a smooth dough, then flatten the dough slightly with a rolling pin. Wrap in cling film and refrigerate for 30 minutes.

Soften the butter by tapping it repeatedly with a rolling pin. Cut into a square, place the trimmings on top of the butter block and flatten slightly. Lightly flour your work surface and quickly roll out the détrempe. Place the butter square on top and fold the dough over it. Lightly tap over the top to ensure the butter is securely wrapped in dough.

Roll out the dough into a rectangle again. Rotate the dough 90 degrees on your work surface. Fold over the bottom third of the dough, then the top third, as above (2nd turn). Gently flatten the dough. Mark the dough with your fingers to remind you how many turns you have completed (2). Wrap the dough in cling film, then refrigerate for 20 minutes.

Next day:
For the almond cream:

Whisk the butter in a bowl to a creamy consistency. Add the sugar and whisk well. Add the ground almonds and mix well. Incorporate the egg, followed by the cornflour and then the rum and mix. Transfer to a piping bag fitted with a plain nozzle and refrigerate for 20 minutes.

Combine the water and sugar in a pan and bring to the boil. Leave to cool.

Roll out the dough to a 1.5-cm thickness and cut into 2 rectangles. Wrap each rectangle in cling film and refrigerate for 30 minutes. Roll out each rectangle to a 2–3-mm thickness and form two squares about 30 cm. Lay one dough square over a sheet of baking parchment and lightly press with the 22-cm tart ring to leave a circular impression. Brush around the marked-out circle with the beaten egg. Pipe the almond cream in a spiral inside the marked-out circle, leaving a 2-cm-wide margin. Slip a porcelain figurine into the almond cream. Carefully lay the second dough square over the top of the first. Press down on the edges to encase the cream and remove any air. Use the 26-cm tart ring to cut out the cake (in order to have a margin of about 2 cm around the almond cream). Remove the excess dough. Use the back of a knife to crimp the edges.

Transfer the cake to a baking tray. Brush all over with the beaten egg, except for the crimped edge. Rest for 15 minutes, then repeat the process. Use a knife to score the top of the cake with lines radiating from the centre towards the edges. Rest again for 30 minutes. Preheat the oven to 210°C (gas mark 6–7). Bake for about 15 minutes until the cake is golden, then lower the oven temperature to 180°C (gas mark 4) and bake for 25 more minutes. When the cake comes out of the oven, brush with the syrup.